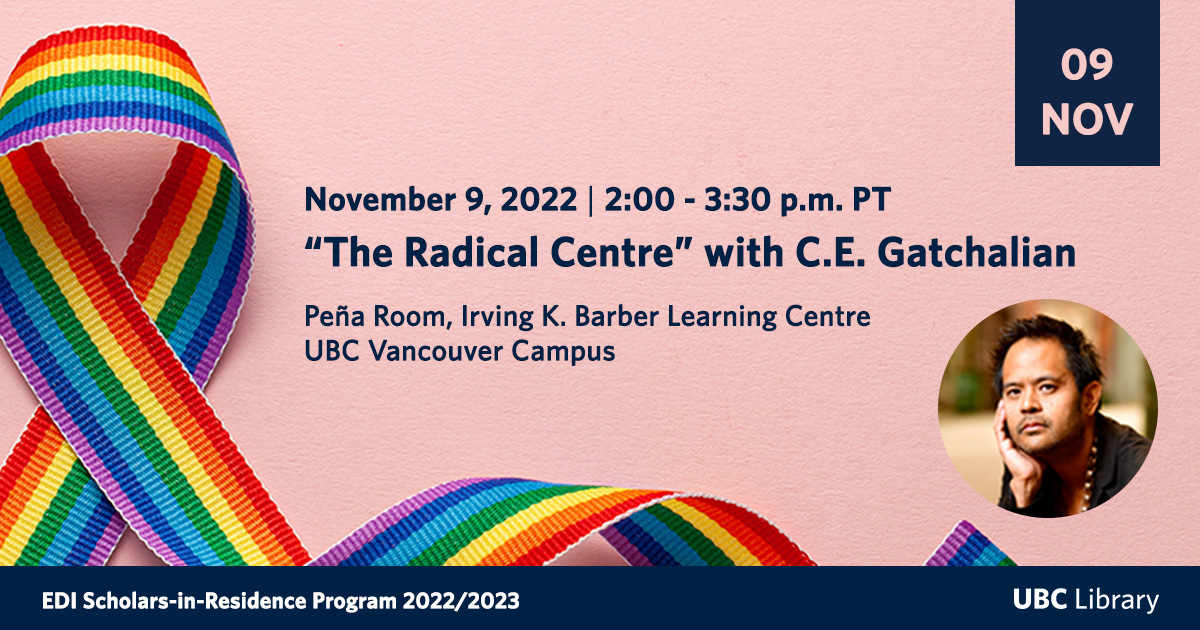 “The Radical Centre” with C.E. Gatchalian

I’ve never had a strong sense of self, and it’s still something I’m working on

This lack of self has manifested itself in a number of ways. As extreme shyness. As narcissism. As obsessive-compulsive disorder. As uncritical obeisance.

Recognizing the role heteronormative white supremacy has played in this struggle has helped me make better sense of it all.  Both my early desire to be white and my later hatred of all things white were manifestations of the same dis-ease: internalized racism.

In this lecture I will talk about swinging wildly from one extreme of the internalized racism spectrum to the other, and how I’ve arrived at where I currently am, “the radical centre.” A place where I am “centred” in my cultural hybridity, and “rooted” in both the trauma and joy I’ve inherited from my ancestors.

(The lecture will also feature appearances from a diverse range of historical figures such as the Buddha, Rodrigo Duterte, Karl Marx and Ayn Rand.)

This event will take place in the Peña Room (Room 301) of the Irving K. Barber Learning Centre.

Born and raised on the unceded territories of the Musqueam, Squamish and Tseil-Waututh peoples (colonially known as “Vancouver”), currently dividing his time between Vancouver and Tkaronto (“Toronto”), C.E. Gatchalian (he/him/his) is a queer Filipinx diasporic author, editor, playwright, dramaturge, teacher and consultant of Tagalog, Ilocano, and Spanish ancestry. A graduate of UBC’s Creative Writing program, he is the author of six books and co-editor of two anthologies. He was the 2013 recipient of the Dayne Ogilvie Prize, two Jessie Richardson Theatre Awards, and a three-time Lambda Literary Award finalist. His plays, which include Crossing, Motifs & Repetitions, People Like Vince, Broken, and Falling in Time, have been produced nationally and internationally, as well as on radio and television. Formerly Artistic Producer of the frank theatre company, Vancouver’s professional queer theatre company, he is the founder of QueerAsian, an ongoing series of writing workshops for 2SLGBTQIA+ Asians hosted by Historic Joy Kogawa House, and is the Outreach and Social Media Manager for CultureBrew.Art, a national searchable database of Indigenous and racialized practitioners in the performing, literary and media arts. His memoir, Double Melancholy: Art, Beauty and the Making of a Brown Queer Man, was published in 2019 by Arsenal Pulp Press, and he is currently co-editing Magdaragat: An Anthology of Filipino-Canadian Writing, to be published by Cormorant Books in Spring 2023. His current work focuses on intergenerational and inherited trauma, and the intersections between race, class, sexuality, and gender; society and the self; history, the present and the future. IG: @ce_gatchalian. Website: cegatchalian.com

Get rid of it

To use this platform, the system writes one or more cookies in your browser. These cookies are not shared with any third parties. In addition, your IP address and browser information is stored in server logs and used to generate anonymized usage statistics. Your institution uses these statistics to gauge the use of library content, and the information is not shared with any third parties.